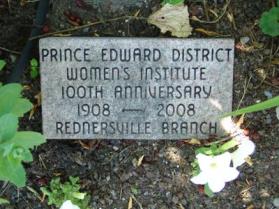 Our members at the Federated Women’s Institutes of Ontario continue to receive acclaim and great press for their efforts at digitizing local history. The Hastings and Prince Edward branches recently received a substantial grant to digitize their Tweedsmuir books, scrapbooks and documentation of their work in the community:

Prince Edward District president Evelyn Peck said there is still a lot of work to do.

“We have 23,000 pages digitized now and there is still a lot to do on the project,” she said. “We have to go through every page to do privacy checks and remove any personal information for living people which makes it a very long process to get pages cleared.”

Brenda DeCastris, curator for Prince Edward District said the books are bing located in various locations, but once found and digitized, are now being stored in the archives of local libraries.

“With the large number of disbanded (W.I.) branches over the last 20 years, the locations of these historic collections are being lost over time,” she said. “Starting in 2010 a concerted effort was made to locate all the Tweedsmuirs across Ontario and a list of all branches past and present, as well as the location of their Tweedsmuirs has been created and is available on the provincial website.”

There’s another writeup over at the esteemed John Reid’s Anglo Celtic Connections.

We love being part of such a wonderful project, and couldn’t be happier that they chose VITA to host their digitized Tweedsmuir books. Congratulations on 23,000 pages shared!