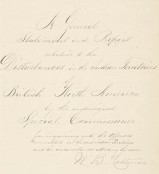 OurDigitalWorld recently collaborated on a transcription project with Library and Archives Canada: the crowdsourced transcription of the handwritten Coltman Report.

LAC wrote a summary of the project on their Discover Blog:

The transcription of this 521-page handwritten report was a resounding success. The transcription tool was announced on June 16, 2016, and thanks to an enthusiastic public, the entire report was transcribed within less than a month. In addition to the transcription, every page has tags related to the individuals, dates, locations and specific events recorded during Coltman’s investigation.

ODW built the public-facing transcription module and are overjoyed to get such positive feedback! Here’s some of the press:

Genealogy Beyond the BMD

John D. Reid at Anglo-Celtic Connections did a write-up of the project’s success, and dropped some hints about how our transcription tool might get used next:

Other fonds are being considered for crowdsourced transcription, one early item being the 100 page diary of Susan Agnes, second wife of Prime Minister John A. Macdonald. Would that be a good choice?

LAC hope to use the occasion of the 150th anniversary of Confederation to similarly crowdsource transcribe other archival material for prominent Canadians.

If you’re interested in learning more about the transcription tool or any of our custom development work, don’t hesitate to get in touch.